The difference between amorphous magnetic ring and ferrite core

The difference between amorphous magnetic ring and ferrite core

Amorphous magnetic ring is a magnetic element processed with amorphous material. According to the different materials of the amorphous strips used, it can be divided into iron-based amorphous, cobalt-based amorphous and so on. According to the shape of the material, it can be divided into strip type magnetic ring and powder type magnetic ring.The characteristic saturation magnetic density of the amorphous magnetic ring is much higher than that of ordinary ferrite and powder magnetic cores, but as the frequency increases, the magnetic permeability will drop quickly, and it is generally used in the frequency band of tens of K to hundreds of K.Amorphous magnetic ring, or metallic glass, is a new type of material that came out in the 1970s. It is a solid alloy (thin ribbon) that uses quenching technology to form molten steel into a thin ribbon with a thickness of 30 microns at a time. ) Is different from the crystal structure of the regularly arranged atoms in cold-rolled silicon steel materials. It is this alloy whose atoms are in an irregularly arranged amorphous structure, which makes it have a narrow BH loop, high permeability and low loss; 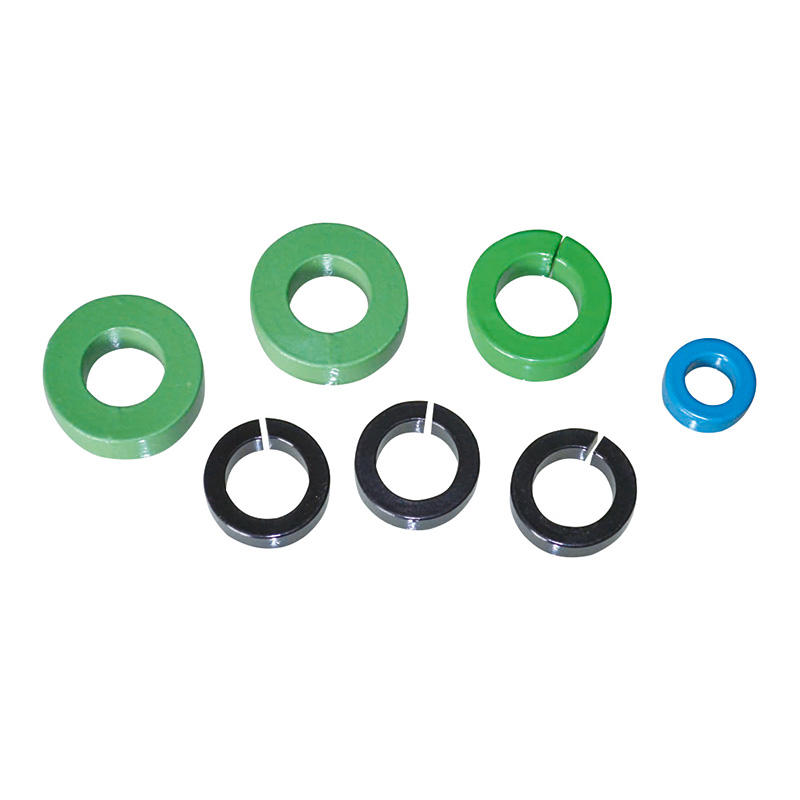 At the same time, the irregular arrangement of atoms in the amorphous alloy restricts the free passage of electrons, resulting in a resistivity 2-3 times higher than that of the crystalline alloy, which is also beneficial to reduce the eddy current loss.Compared with the traditional transformer using silicon steel sheet, the no-load loss of the transformer core made of amorphous alloy is reduced by about 75%, so that the amorphous alloy transformer has obvious energy saving and environmental protection effects.

Ferrite cores are mainly composed of iron (Fe), manganese (Mn), and zinc (Zn), and are usually called manganese-zinc ferrite. The toroidal ferrite core has no air gap and the same cross-sectional area, so the magnetic effect is very high.The ferrite magnetic ring has a lot of specifications and sizes, which can be selected according to the material of the magnetic ring, and different coatings can be used to simplify the winding and increase the breakdown voltage.

The ferrite core is made of a dense and homogeneous ceramic structure non-metallic magnetic material, with low coercivity (after the magnetic material is saturated magnetized, when the external magnetic field returns to zero, the magnetic induction intensity B does not return to zero, Only when a certain magnitude of magnetic field is added to the opposite direction of the original magnetization field can the magnetic induction intensity return to zero. This magnetic field is called coercive magnetic field), also known as soft ferrite.It is composed of oxide or carbonate compounds of iron oxide (Fe2O3) and one or more other metals (such as manganese, zinc, nickel, and magnesium). The ferrite raw material is pressed, then sintered at a high temperature of 1300℃, and then machined to produce a finished magnetic core that meets the application requirements. Compared with other types of magnetic materials, the advantage of ferrite is that the magnetic permeability is very high, and It has the advantages of high resistance and low eddy current loss in the general frequency range.